About  >
Tony Wheeler OAM GAICD
<  Back to Mercy Education Board Members 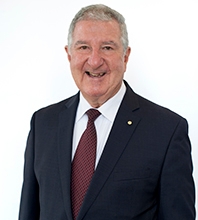 In December last year, Sr Berneice Loch rsm, Institute Leader, was delighted to announce the appointment of Tony Wheeler as Board Director of Mercy Education. Tony brings much experience and expertise to Mercy Education and a long commitment and passion for serving the Church and charitable works.

From a varied career which included senior roles in both Corporate and Commercial banking, Tony retired from Australia’s Westpac Banking Corporation in January 2001, having completed 41 years service and attained the position of State Manager Lending in Western Australia.

His involvement with the broader church and education and healthcare in particular, commenced during the latter part of his time in banking where he was at various stages, responsible for the banking needs of the Catholic Church in Western Australia and also one of the major Catholic hospital groups in Australia.

The former responsibilities led indirectly to his being invited to join the Mercedes College Board in 1992 and it was there that he served as Chair of the Finance Sub Committee and subsequently, from 1997 until 2004, as Board Chairman.

For the past twelve years he has devoted his energies to a number of different ministries, principal among which, he was for some nine years a Board member and towards the conclusion of his tenure, Deputy Chair of MercyCare (WA). MercyCare, being one of the original Public Juridic Persons raised in Australia to continue the health, aged care and family and community service works of the Perth Congregation of the Sisters of Mercy. Also over this period, Tony was a member of the Catholic Health Australia Stewardship Board following his election in 2005 and there he served as Treasurer, Deputy Chair and for his last four years, Board Chair.

Currently he Chairs the Archdiocesan Catholic Development Fund of Perth, is a member of the Finance Advisory Committee to a prominent Religious Congregation, and when required, an Auditor/Advocate for marital cases within the Tribunal of the Catholic Church. In addition he is involved in Parish and Diocesan work within the Bunbury Diocese WA. Tony is committed to the ministries of Church, especially in the cause of social inclusion for the less fortunate and was delighted to resume his relationship with Mercy Education, when appointed to the Board in
2012.